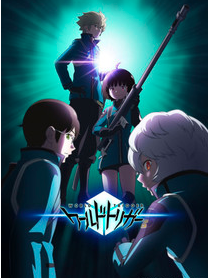 It finally happened. After a six-year hiatus, a split cour, and at least two weather-related delays, World Trigger has finally been able to conclude the Rank Wars arc. It feels like forever ago that Daisuke Ashihara took his sci-fi battle series about alien invasions and swerved it into a stealth sports manga. Sure, the previous season made a short dip into the ongoing invasions of the Neighborhood, but the series has been at its most engaging when it’s throwing multiple highly-skilled teams of fighters into complex, tactically-minded battles, and that’s very much true for season 3.

The first half of the season is all about Hyuse – the logistics of gearing him up and shifting Tamakoma-2’s strategies around both him and Yuma’s skillsets. In typical World Trigger fashion, it starts out a bit dry, going over Hyuse’s new Trigger loadout, analyzing their opponents for the next match, and all the sort of place-setting that’s necessary for later – in other words, not terribly compelling television. The actual match, however, is a great one, with all three of Tamakoma-2’s opponents pulling out new strategies and even using the quirks of the terrain to their advantage. Suzunari-1’s idea to shut off the power in the main building is an especially inspired trick, and another example of just how much thought Ashihara puts into every fight across this entire Rank Wars saga.

Thankfully the extreme animation improvement from the previous season carried over too, with the match featuring plenty of fast, powerful action sequences to match its participants. Chika’s meteor attack is probably the highlight of the whole thing, delivering one of the most hellacious animated explosions you’ll ever see, and showing just how much destructive power sits inside this tiny bird girl. It’s just a great fight in general, letting each of Tamakoma-2’s opponents show off their ingenuity and tenacity, while also demonstrating how much difference Hyuse can make as a combatant. It’s slightly hampered by knowing the whole thing is only the penultimate fight, but it’s got about everything you could want from a good shonen scrap.

With Hyuse established on the team, the back half of the season turns to the final round, where Tamakoma-2 will get a rematch with the incredibly dominant Ninomiya Squad that totally shut them out in season one, and focus zeroes in on Chika as our heroes’ potential weak link. Chika’s been around since nearly the start of the show, but as the cast has ballooned and Osamu’s struggle for improvement took the spotlight during the Rank Wars, she’s yet to really get a big moment of her own. She’s been useful, certainly, but World Trigger is already pretty glacial when it comes to big, emotional character moments, and it’s left Tamakoma-2’s littlest weapon of mass destruction by the wayside for most of its run.

But with their toughest challenge on the horizon, it finally comes time to push Chika out of her comfort zone, and in probably the most emotionally hard-hitting episode since the anime’s revival, we finally get a look inside the scared, insecure teenager behind the sniper rifle. It’s a powerful moment that really humanizes Chika, revealing all the twisted up emotions and spinning gears that she’s been hiding behind her quiet nature this whole time. It’s always been funny to see this minuscule kid fire a damn plasma cannon in fights, but learning that Chika is scared of that power – and specifically how others will treat her after seeing it in action – retroactively makes everything about her make more sense. Her resolution to overcome those fears for her teammates reaffirms her relationships with Osamu and Yuma before the big match, and even sets up Hyuse’s best moment for the final bout, as he promises to guide her through the process of taking her first real killshot.

Though that last match does come with some issues. The fighting itself is fantastic, with episode 13 delivering far and away the best-looking episode of World Trigger ever assembled, and a dark horse candidate for the best action setpiece of this young year. The initial setup is a strong showcase for Hyuse as he finds himself surrounded by enemies, battling tooth and nail to survive in the center of a chaotic battlefield. It manages to immediately challenge Tamakoma-2’s new powerhouse, putting them on the backfoot when they should be at their strongest, and it throws the fate of the whole battle into question from the word go.

The problem comes with the only new opponents introduced for this match: Yuba Squad. The characters themselves are fine, with their captain Yuba sporting a cool design and nifty six-shooter trion revolvers, but they don’t end up mattering much despite getting an entire episode and change dedicated to setting them up. Only one of them has an individual fight against Tamakoma-2, which only ends up being a minor inconvenience, and the fight eventually whittles their whole squad out before they can accomplish much. It’s not terrible, but by the time the final episode starts, you have to wonder what all the fuss was they managed to do that the already-established (and present!) Ikoma Squad couldn’t have pulled off. This show already has enough characters to fill several dozen clown cars, so adding more in this late in the game just feels like unnecessary padding.

But that all falls by the wayside once things narrow down to a 3v3 between Ninomiya Squad and the original Tamakoma-2 lineup. The ensuing fight is as tense and intelligently written as any before it, delivering on the David & Goliath dynamic established across the whole season. And it’s Chika and Osamu’s big moments that put the whole thing over the top. Yuma has been the ace of the team since the beginning, always the one landing the important blows and getting the key wins while the others played support. But here we see two true underdogs overcome their weaknesses together in a single second, and taking out a far stronger opponent by weaponizing their weak reputations.

It’s such a fantastic moment that the season chooses to pretty much end right there, with no real sense of denouement outside of knowing that Tamakoma-2 has earned just enough points to qualify for the Away Team. There’s a “to be continued” image at the end of episode 14, but I’d advise anime-onlies to not hold their breath. The manga’s long hiatus, followed by its move to monthly publication, means there’s barely any source material left to be adapted, so a potential fourth season is likely as far off as season two was from the first.

Lack of a concrete ending notwithstanding, this is still an excellent season overall, and definitely worth watching if you’ve previously enjoyed World Trigger. It carries over all the strengths from season two’s revival, but is able to hone in on all the aspects that make this series so unique in the battle shonen landscape. While it still carries its less-appealing eccentricities – there are no boardroom meetings, but we do see an entire episode that’s just the extended cast going out to eat at various restaurants – that’s just part of the charm at this point, and overall this caps off great, unexpected return for the franchise.

Raven of the Inner Palace, The Hidden Gem of Fall 2022

Ash’s Mother Is Rarely Present In The Pokémon Anime